In late 2020, the cities within the LA Operational Area worked together to procure emergency management software for the region. The project was spearheaded by Randal Collins, the City of El Segundo Emergency Management Coordinator. He, along with fellow colleagues, saw the need for a coordinated, integrated common operation picture that spanned the entire County and connected all the emergency managers and other stakeholders onto one platform. 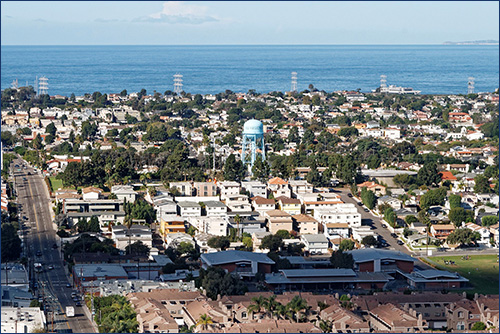 The Los Angeles Operational Area wanted a system that would provide elected officials, city managers, department directors, operational managers, and other partners with situational awareness of incidents and events. They needed a system that would allow all of the municipalities to manage situations within their jurisdictions and also to coordinate with each other on multi-jurisdictional emergencies. The goal was a system where all stakeholders could share information and resources, as well as view important information in maps and dashboards.

After a competitive RFP process, BCG’s DLAN software was selected. One of the main reasons DLAN was chosen is that the system does not include individual user licenses. This means that various partners across municipalities could be added to one system quickly and easily. The intuitive user interface meant new users can also be added with minimal training. This makes it easy to bring in all necessary parties during a crisis.

The Los Angeles Operational Area liked DLAN’s flexible and modular design that allowed them to add on features as needed. DLAN’s system is also fully configurable, so the system could be setup to fully meet the exact needs of the area. Collins notes “You don’t get that level of customization with other products.” He also remarked that the in-depth implementation process really helped the cities work through the various processes and workflows necessary to make a cross jurisdictional system work for all involved.

BCG’s commitment to customer support set it apart from its competitors during the bidding process and has been very beneficial to involved stakeholders during the implementation process. Collins commended the BCG team on their responsiveness throughout the process and even noted that the team proactively pushed the project forward.

“BCG really took the reins and guided us through the entire process. They were relentless in scheduling meetings and making sure forward progress kept happening... BCG’s commitment to project management really took the burden off of the emergency management staff and saved them a lot of time.” Randal Collins – City of El Segundo

A full roll out of the system is planned for the Fall, but the operational area is already seeing the benefits of DLAN. The City of El Segundo is utilizing the system for their own emergency operations and for creating Incident Action Plans. The system will be used for Super Bowl 2022, which will be played at SoFi Stadium in Inglewood, California. As other municipalities are onboarded the vision of real-time multi-jurisdictional situational awareness and collaboration will be fulfilled.

DLAN is engineered by BCG, a veteran owned small business that has over 35 years of experience in Maritime Simulation Solutions, Incident Management Systems, and custom hardware & software engineering.

The City of El Segundo is ideally located on the Santa Monica Bay encompassing over five square miles, spanning from Los Angeles International Airport on the north, the City of Manhattan Beach on the south, the Pacific Ocean on the west and the unincorporated area of Del Aire and the City of Hawthorne east of Aviation Boulevard.

El Segundo is home to the Los Angeles Times, Los Angeles Air Force Base and dozens of Fortune 500 companies. Recognized as the aerospace capital of the world, the city’s vibrant economy includes leaders in the aerospace and defense, bioscience, information technology, energy, real estate, and creative media.

We use cookies and similar technologies to improve our user experience and measure the effectiveness of campaigns/analyze traffic, please see our full privacy policy for additional details. By clicking "I Accept" you consent to the use of cookies (unless you have disabled them on your browser).